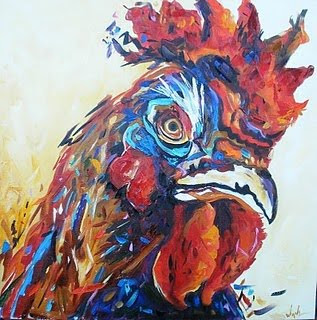 Red Rooster - SOLD
This contemporary oil painting sold over the weekend at the Dutch Art Gallery in Dallas. I know that he will enjoy his new home, and I thank the individual who purchased Red Rooster. He is quite a character, and I hope that he will bring alot of joy and conversation to the new owner. I had a great day painting yesterday, in the middle of three paintings. Thanks for viewing this blog! Please feel free to visit my website at www.kwyne.com.
Posted by Kay Wyne at 5:21 AM No comments: 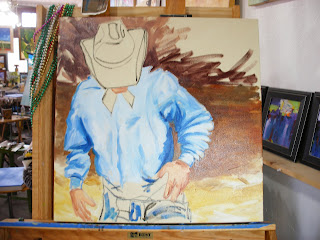 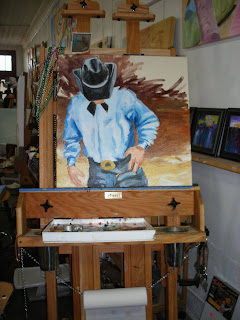 I started this painting today...it is a 24" x 24" gallery wrap canvas. I started out with a titan buff background, then loose oil sticks for the image, and gradually painted in with oil paint using a wide brush. I plan on working on the background before I do any more work on the cowboy. I had alot of fun in front of the easel today...I can't wait to go back to the studio tommorrow.
Posted by Kay Wyne at 10:26 PM No comments: 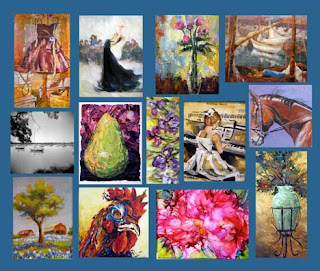 Dutch Art Gallery in Dallas, Texas
Finding Her Voice, A Celebration of Women Artists
April 10th thru May 15th
Saturday April 10, 201011:00 to 1:00- Artist Demonstrations1:00 to 3:00- Artist DemonstrationsSunday, April 11, 201012:00 Gallery Opens1:00 Artist Reception2:00 Film “Who Does She Think She Is”3:30 Panel Discussion- Women in Art5:30 Gallery Closes Saturdays between April 17 and May 15, 2010 Artist Demonstrations or Workshops
This unique event will include a month long feature of over 40 women artists from around the globe and our own backyard in media ranging from encaustic wax painting, to jewelry, to photography and of course our main specialty oil painting.

Labels: Kay Wyne, Who Does She Think She Is, women artists 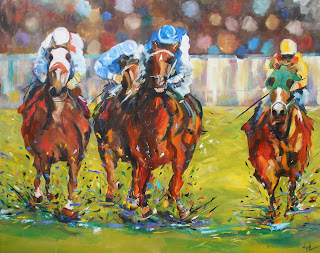 The Inside Track
Oil on Canvas
24" x 30"
I finished this painting. Normally I paint odd numbers of objects or subject matter in my paintings, but four horses seemed to work for me on this canvas. I did have some horses in the background at one time, but decided to blurr the background completely. Initially I had the starting stalls in the background with roof and sky painted in, but I changed my plans. The horse with the green blinker on the inside track is in the lead. This painting conveys the energy, excitement, and competitiveness of the horse race. This painting will be for sale once it dries and placed up at The Dutch Art Gallery in Dallas, Texas. Thanks for viewing this blog. Please contact me if you are interested in this painting that is fresh off the easel!
Kay at 214-532-0325 or kay@kwyne.com.
Posted by Kay Wyne at 7:20 AM No comments: 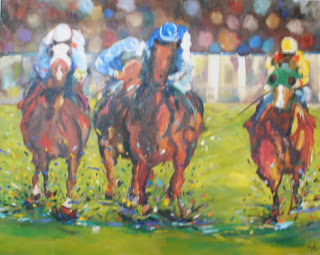 This painting is on the easel...needs some touches of detail and it will be finished. This painting is going to need a frame...it is on a 24" x 30" canvas. These race horses are in the middle of a tight race. Lots of action, movement and color. After taking a pic of this painting, and posting on the computer I am able to see some "mistakes" or small things that need changing. The background has a problem --- I spent quite a bit of time on it, wanting to making it recede and fuzzy. The jockey's jerseys need some touches of detail, and the horses need some definition on the head. I hope to put this in the upcoming show at Dutch Art Gallery....Who Does She Think She Is? 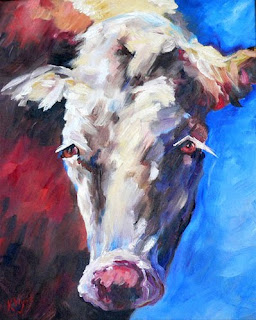 Elsie
Oil on Canvas
16" x 20"
This painting is currently at the Dutch Art Gallery in Dallas. For more information on this contemporary oil painting, please contact me at 214-532-0325 or kay@kwyne.com.
Thanks for viewing this blog!
Posted by Kay Wyne at 7:23 AM No comments:

First Day of Spring in Texas! 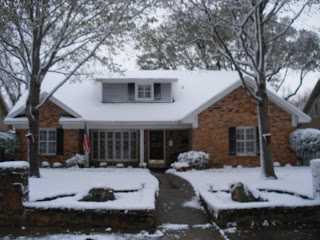 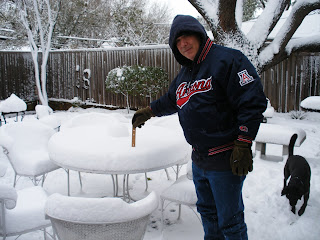 Today is the first day of spring, and our 6th snowfall of the season. JW is measuring in the above pic (with Penny Lane watching), and we have 6 inches of snow right now. Our plants and flowers are all covered or inside. This is just crazy! I just had to post these pics....more art tomorrow!
Posted by Kay Wyne at 10:23 AM No comments: 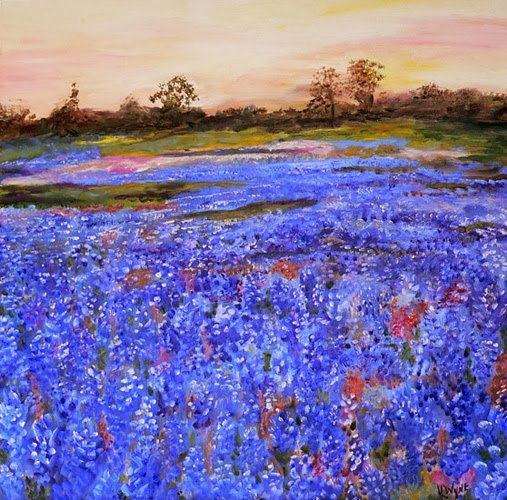 It is spring in Texas...the Wildflowers will be out very soon. This oil painting is currently at the Dutch Art Gallery in Dallas. If you are interested in purchasing, please contact Pam at Dutch Art or Kay (
kay@kwyne.com). Thanks for viewing this blog! 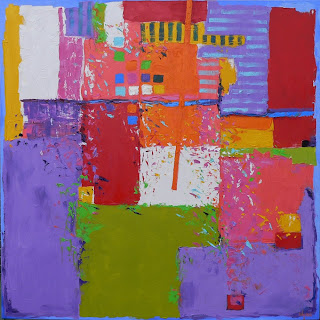 Celebration
36" x 36" Oil on Canvas
This contemporary abstract painting is hanging at the Dutch Art Gallery in Dallas. It was painted last year and because of the colors and movement in this painting, I named it Celebration. It is appropriate for me to re-post this painting...The Wyne family has been celebrating lately with the engagement of our daughter, Lindsay to Wesley. My painting time has taken a backseat to the engagement, engagement party and wedding plans. But, I hope to get back into the studio today. I have gotten re-charged and very inspired after taking a little trip to Ft. Worth to visit the Kimbell Art Museum yesterday. I hope to have some new paintings to post soon! Thanks for visiting this blog.
Posted by Kay Wyne at 7:36 AM No comments: 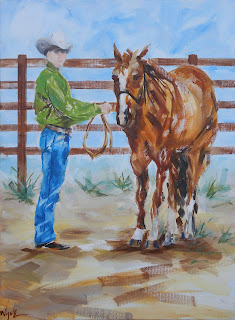 Dipped N Vip
Oil on Gallery Wrap Canvas
12" x 16"
This painting is dedicated to my nephew, Casey Settles. I used a 2008 photograph of him and Dipped N Vip (yes, that is the horse's name) as a reference for this contemporary oil painting. The brush strokes are loose and don't have much of detail. The photograph I was using was taken indoors, but I put Casey and the horse outdoors. I am told that Dipped N Vip is a very special horse, and it is owned by Black Hawk Community College, located in Illinois. He is very handsome and had great colors.

I started this painting last week, and to my surprise I was informed that Casey would be representing West Texas A & M in the Inter-Collegiate Horse Show and Regionals in Gainesville, Texas. Since he would be competing about an hour from Dallas, John, Lindsay and I went to the horse show last Saturday. That was a neat experience to see six schools compete, with the two top equestrian riders moving on to the Semi-Finals in Los Angeles, California. Congratulations to Casey....he placed second, and will be competing in LA!!!! "Whoop!", as my Aggie son would say!!!
Posted by Kay Wyne at 6:41 PM 1 comment: 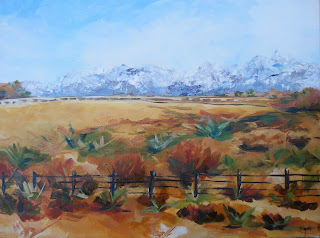 Colorado Landscape
Oil on Linen
12" x 16"
This painting was inspired by a photo that my husband took about fifteen years ago when he went to New Mexico and Colorado on a fishing trip. The rugged landscape of Colorado is so beautiful that I had to paint it. It will be hanging at The Dutch Art Gallery once it is dry. Contact Kay at kay@kwyne.com or 214-532-0325.
Posted by Kay Wyne at 6:48 AM No comments: 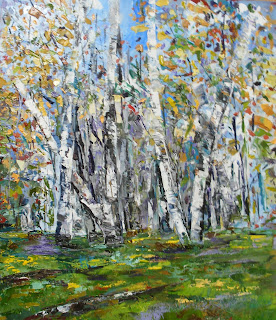 Aspen Trees
Palette Knife Painting
Oil on Masonite
This painting has layers and layers of color. I started with a piece of gessoed masonite. Then a layer of venitian red acrylic paint. I was experimenting with the red as a base layer. You can see some of the red coming through on the painting. I learned alot from this painting...and although it was fun, I could not wait to get back to painting on linen or canvas. Many artists paint a base color before they start painting, but for some reason it bothered me to have a solid red base coat...my eye prefers an off-white clean canvas. I have this framed in a handsome black frame...it will be going to the Dutch Art Gallery soon. Thanks for viewing this blog! You can contact me at kay@kwyne.com or 214-532-0325.
Posted by Kay Wyne at 6:29 AM 2 comments: 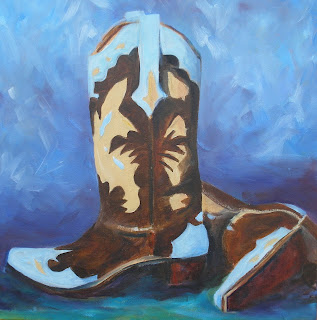 Boots
Oil on 18" x 18" Gallery Wrap Canvas
I had a good day at the studio yesterday. I pulled out several paintings that needed to be signed, finished or photographed. I started a new painting (will keep you guessing on that one), and hope to get alot accomplished today. These boots are great looking....I photographed them back in October. I loved the colors and stitching on them. They were new, so they did not have any scuff marks or character marks on them. This painting is ready to hang...no frame needed. Thanks for viewing this blog. Please contact me if you are interested in this painting. kay@kwyne.com or 214-532-0325.
Posted by Kay Wyne at 6:40 AM No comments: 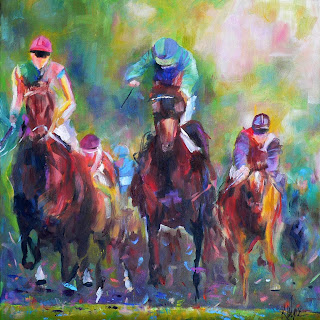 Finish Line
Sold
I am in a slump with my painting. So I have been going back through my photos of old paintings, and this is one painting that I really enjoyed painting. It has many characteristics that I would like to repeat in my next painting. My brushes have not cooperated with me lately, so hopefully I can get in the studio and get things going again. I don't understand why I can paint some days, and then some days it just doesn't happen. I hope my easel is friendly today.

“Creativity is allowing yourself to make mistakes.
Art is knowing which ones to keep.”
Scott Adams
Posted by Kay Wyne at 6:55 AM No comments: