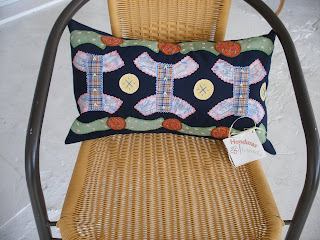 This little pillow was found on Sunday by John Wyne while he was riding his bike in downtown Dallas. He thought it was odd that a cute and unique pillow would be in the street. John looked around to see if he could find the owner, or figure out where it came from, but did not have any luck. He picked it up and brought it to me at the studio where I was painting. Then he resumed riding. Later he saw two chairs with one pillow out on the sidewalk on Harwood Street...he went inside and met Pamela Nelson, Sally Sloan and M'Lou Bancroft. Yes, he found the home of the pillow that had blown away from Honduras Threads. When we left the studio we returned the pillow to Honduras Threads, temporarily set up in Pamela's studio. 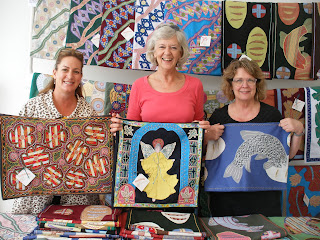 I was so impressed with Honduras Threads that I returned on Monday with Carol Morgan and Sharon Hodges. Here is Sally Sloan, M'Lou Bancroft and Pamela Nelson holding some of the wonderful linen pillow shams and runners that were made Honduran women. Please go to the website for more information: http://www.hondurasthreads.org/ 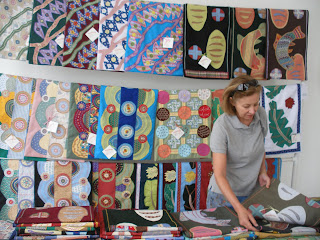 Sharon Hodges was amazed at the quality of these pillows. Wonderful colors, designs and we were wowwed by it all. It was so much fun to visit Pamela's studio and see such wonderful works of art. No two pieces were alike...all stitched with fine craftsmanship. It was wonderful to see it all! Please support Honduras Threads if you have the opportunity to purchase a pillow or runner.
Posted by Kay Wyne at 7:28 AM 15 comments: 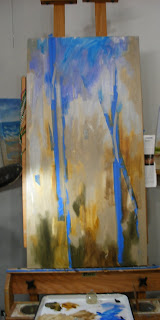 I am back in Dallas after a trip to Macomb, Illinois. I did not know what I wanted to paint, and put a large canvas on my easel yesterday. I started with some earthy colors, but gradually started applying some blues. I wanted to apply thick layers of paint with the palette knife, and have a good start on it. I will put some aspen trees in the painting today. It was really good to get back in the studio and see some of my studio partners. 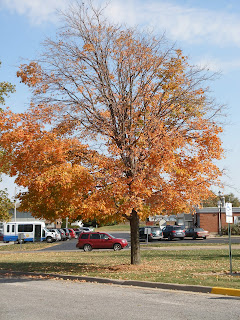 I was amazed at the color I saw in the leaves in the midwest. That was a bonus for me on this trip. My mother is currently in the hospital, and this tree was outside the front door of the hospital. I think it is the only picture that I took all week. Everything took a backseat--- as my mother's health is deteriorating and her health care was the priority. I usually get some livestock, barn and landscape pictures while traveling, but not this trip. Thanks for viewing this blog....
Posted by Kay Wyne at 7:10 AM 2 comments:

Labels: Kay Wyne, on my easel

Untitled Abstract
Mixed Media on Raymar Cotton Panel
Framed in black moulding
Hanging at The Wine Therapist in Dallas, Texas
Contact Kay for more information at kay@kwyne.com or 214-532-0325
Posted by Kay Wyne at 6:32 PM No comments: 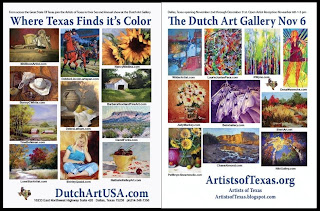 This two page ad is in the upcoming American Art Collector! It is a great spread (put together by Laurie Pace) featuring the Artists of Texas show at Dutch Art Gallery in Dallas. More on that show later.

I don't have a new painting to post today, but I think I am over the painting slump that I have been in for several days. I have two commissions I am working on, and about 2:00 yesterday afternoon I cut loose on the mixed media piece and things started working for me. I have to make another trip to the art store and get a few more photographs to work with, but at least I am not staring at a blank canvas. Forced creativity was getting the best of me. So I will be back in the studio today hoping to have a productive day! I hope yours is a good one.
Posted by Kay Wyne at 7:36 AM No comments:

Go Away Dragonfly
10" x 20" Oil on canvas
Palette Knife Painting
This painting has gone through alot. At one time it was a totally different image...a green dragonfly with detail on the wings. I got irritated with it all and made it go away with the palette knife. So, Go Away Dragonfly is one of those paintings that just happened. There is thickness and texture to the paint...bold and deliberate on the canvas. This contemporary abstract will be hanging at the Dutch Art Gallery, and probably framed in a gold frame. Thanks for viewing this blog. Have a great day!!!!
Posted by Kay Wyne at 4:53 PM 1 comment:

Once In a Blue Moon 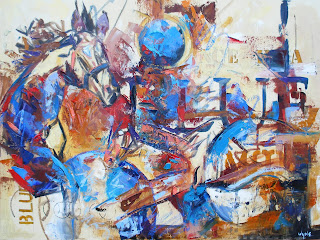 Once In a Blue Moon - SOLD!
16" x 20" Gallery Wrap Canvas
Contemporary Oil Painting
Once in a Blue Moon ... a phrase that we have all heard. This was a topic of conversation in the Wyne house lately....it is a common way of saying not very often, but what exactly is a Blue Moon? It is the second Full Moon to occur in a single calendar month. That occurred last December, when we had a Full Moon on the 2nd and the 31st. According to the experts, there will be 41 months that have two Full Moons in every century, so you could say that once in a Blue Moon actually means once every two-and-a-half years.
Once in a Blue Moon is also a title for lyrics to songs....like the Van Morrison song....
Once in a blue moon
Something good comes along
Once in a blue moon
Everything's not going wrong
When you get weary
Beating on the same old gong
Once in a blue moon
Someone like you comes along
When I started the above painting, I had a collage look going, starting with the words, Once in a Blue Moon painted on the canvas several times. If you look closely you can see them under the layers of paint. You can also see two images of horses, geometric figures and layers of paint along with oil crayons. There is alot of movement in the painting and the eye jumps from one shape to the next shape. This contemporary abstract oil painting is now signed and completed after weeks on the easel. It is on a gallery wrap canvas, so no frame is needed. The collector who now owns this painting lives in Connecticut. Thanks for viewing this blog!
Posted by Kay Wyne at 6:56 AM No comments: 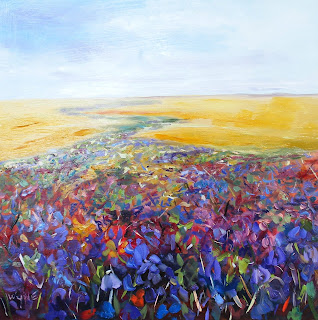 This landscape painting is SOLD! It is a 12" x 12" oil on masonite, in a gold frame. The colorful field of flowers has just about any color. I wanted the eye to move around and find some interest in the field. Thanks so much for viewing this blog. Kay 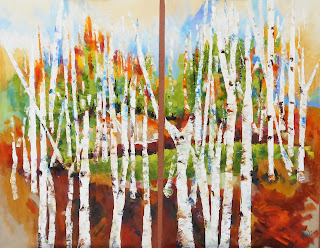 Contemporary Aspens Diptych
48" x 60" (Two 48" x 30" canvases)
Oil Palette Knife Painting
I finished this painting...signed it and put the fan on it since it is very wet.
This is the first time that I have painted on Heavy Duty Canvas...I liked it alot.
I moved the wet canvas outside to photograph,
so the dark brown line inbetween the paintings is the outside of the studio.
I put a zig-zag dark path in the background so that the eye moves around the canvas.
Thanks for viewing this blog...
(p.s. I am not sure what the title of this should be....any suggestions are welcome!)
Posted by Kay Wyne at 4:32 PM 2 comments: 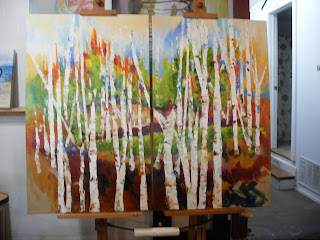 I changed the green up, and added more paint and details to the aspens today. More paint, more shapes, more work on this painting tomorrow. 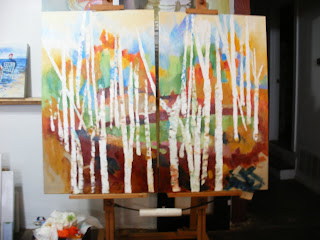 This is one of the projects I have been working on this week...a dyptych in oils. Each heavy-duty canvas is 48" x 30", so overall size is 48" x 60"...I have gone through numerous tubes of paint on this painting already. I have more color and depth to put in, and then the aspens need more paint. Actually, this is not my easel...I am using Sharon's easel because it large enough to hold two canvas' side by side. Tomorrow I will post the painting sitting on my easel.

I went to the studio everyday this week to paint, and then today painted en plein aire....outside. It was a beautiful, sunny and warm October afternoon, and was fun painting with an old friend and a new friend. The location of the paint-out was great. I hope to go back tomorrow!!! Thanks for viewing this blog, and looking at my art. Have a great weekend!