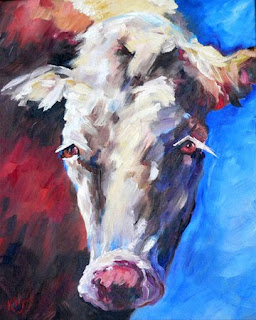 Elsie
16" x 20" Oil on Canvas
Don't forget to pick up the December issue of SOUTHWEST ART. Laurie Pace designed a great spread for Contemporary Fine Art International --- eight pages in all. On page 27, you can see the above painting.....there is some great art work displayed from the members of Artists of Texas. Check it out! Have a great day....
Posted by Kay Wyne at 9:45 AM No comments:

Horizon Series: Abstract #25
Oil on 12" x 36" Gallery Wrap Canvas
I have five new paintings in progress that are sitting on my easel...all are at a turning point...and I am not sure what I am doing with them. I don't want them to turn into wipers, as I was having "issues" with the green in one of the paintings. I had painted a pastoral scene the day before Thanksgiving, and did the usual Kay Wyne/green takes over the canvas trick. The minute I put green (I am mixing my own green...no green straight out of the tube) on the canvas, green takes over and in my opinion, totally dominates the painting. My struggles with green continues, and it happens to me over and over.
I was not planning on going to the studio yesterday, but I needed a break from putting up the Christmas tree and decorations. I am always in the mood to paint, but I took it slow yesterday because I did not want to mess up the background on a longhorn painting. I don't know when I will painting again...I do know we will be decorated for Christmas by the end of the day. Thanks for viewing this blog.
Posted by Kay Wyne at 6:39 AM No comments: 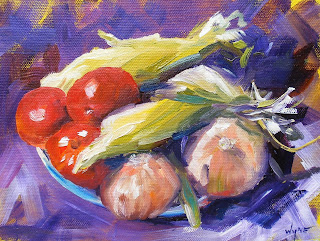 Eat Your Veggies
6" x 8" Oil on Cotton Panel
Happy Thanksgiving...I thought it would appropriate to post one of my small paintings today...food of course. I hope that you all enjoy your day with friends and family. Travel safely. Happy Thanksgiving to all.
Posted by Kay Wyne at 9:32 AM No comments: 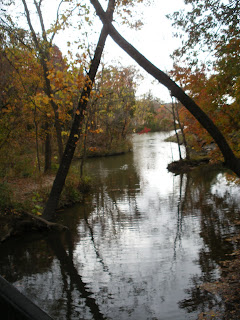 I ventured out in the wind on Monday to White Rock Lake to paint. Here is a photo of the location that I did my plein air painting from. It is wonderful to interpret a scene en plein air, and then use that study for future paintings. I forgot to take a pic of the painting, but will do that today at the studio. I think I will continue on with this painting, to see what else I can get from it...maybe paint it on a large canvas. The open studio tour is over, the receptions for the three shows that I have hanging in Dallas are over, and now I need to focus on some commissions and complete several paintings at the studio. Thanks for viewing this blog...have a great day as we all prepare for Thanksgiving.
Posted by Kay Wyne at 7:07 AM No comments:

I am not posting a painting today...yesterday I struggled at the easel, and attempted to finish a commission piece. It was one of those days. So today I am going to paint what I want to paint. We are also busy hanging art and cleaning up the studio for the tour. Here is some information on The Cedars if you are not familiar with this neighborhood in Dallas.
Saturday, Nov. 20, 2010: 12 p.m. to 6 p.m.
Cedars Open Studios Tour
The Cedars is home to fine artists and craftsmen working in every genre. Their studios, just south of downtown, have helped the neighborhood come alive. Once a year the studios are open to the public. Come see where ideas are created, and where art, community and economic development come together to make the Cedars such a unique area of Dallas.
The eight annual Cedars Open Studios is your opportunity to learn about the neighborhood and the numerous professional artists and craftsmen residing in the Cedars. The artist studios are open year around by appointment, but once a year, they open on the same day, giving visitors a chance to really experience a creative, evolving neighborhood.
About The Cedars Neighborhood - Historically, the Cedars was among Dallas’ first elegant neighborhoods, named after the forest of cedar and oak trees lining its streets. The Cedars became home to some of Dallas’ great leaders, including Alexander Sanger, of Sanger-Harris and Stanley Marcus, of Neiman-Marcus. The Cedars also boasted Dallas’ first old city park (now Heritage Village), the city’s first water pump station, its first telephone exchange, first zoo, and numerous stately mansions.
As Dallas grew, the Cedars, already home to many of the city’s leading businesses, embraced the new industrialization. The quiet, Victorian village, perched on the south edge of Downtown Dallas, became a thriving industrial center with factories and warehouses, such as the old Sears-Roebuck building (now South Side on Lamar lofts), which is home to numerous artists and civic leaders. Eventually, as commerce evolved, the Cedars became ripe for a new wave of people who realized the potential of this convenient, eclectic and historic neighborhood. These people are now transforming the Cedars into a unique community that nurtures vibrant, creative people who enrich Dallas with character and culture. The Cedars Open Studio Tour is an annual celebration of this evolving, eclectic neighborhood. Visit www.cedarsopenstudios.com for a map of the tour and more information.
Posted by Kay Wyne at 7:01 AM No comments: 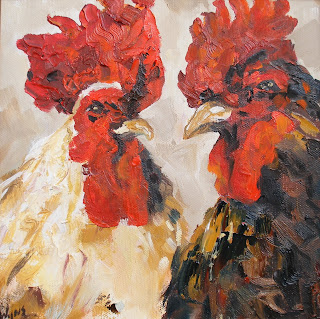 New Friends
8" x 8" Oil on Cotton Panel
I just signed and framed this painting yesterday. It will be hanging at our Open Studio Tour on Saturday. I love painting contemporary roosters, chickens and hens...they are so colorful and full of personality. These two feathered friends are checking each other out...
Thanks for viewing this blog. Please contact me if you are interested in purchasing this painting! Kay at 214-532-0325 or kay@kwyne.com.
Posted by Kay Wyne at 6:21 AM 2 comments: 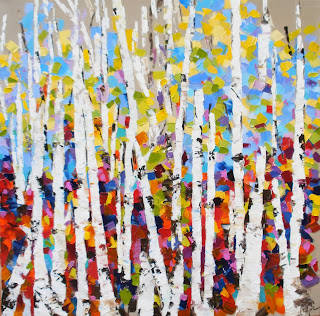 This 36" x 36" Oil Painting on Gallery Wrap Canvas is finished! I worked on it all morning at the studio, signed it and hung it for the Open Studio Tour this weekend. The paint is exstremely wet. I am not sure what I will name this painting. I started it at The Dutch Art Gallery on Saturday for a palette knife demonstration.

A reminder that The Texas Discovery Garden at Fair Park in Dallas has the exhibit, Bringing the Trinity to Life. Studio Art and Soul will be exhibiting at the Discovery Gardens through the end of the year. Coming up this Saturday, November 20, 2010 - 8th Annual Cedars Open Studios Tour. This is always a fun event...please visit our studio and the neighborhood studios in The Cedars of Dallas.

Thanks for viewing this blog! Have an artful day. 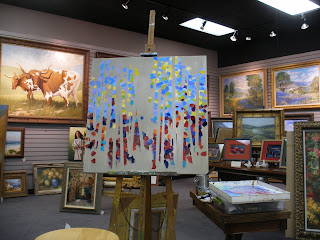 Here is a pic of the demo that I did at Dutch Art Gallery yesterday. I started by toning the canvas with a warm grey. Then began putting the paint on with my palette knife. I had taped off some of the larger areas that would eventually have titanium white so that the white would not get muddy or streaked. The canvas is 36" x 36" so it will take a while to get it covered with paint...it will take alot of paint for sure.

The day went by fast because there were alot of people stopping in. Pam had a constant stream of framing customers, and then there were those who came in to see the Artists of Texas Annual show, Where Texas Finds It's Color... artistsofTexas.orgArtistofTexas.blogspot.comDailyPaintersofTexas.blogspot

I hope to take this canvas to the studio today and work on it. Thanks for viewing this blog. Thanks for stopping in at The Dutch Art Gallery to see the show. Kay
Posted by Kay Wyne at 7:01 AM 2 comments:

Where Texas Finds It's Color 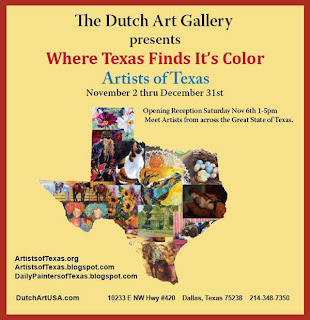 I will be at The Dutch Art Gallery doing a painting demonstration today from 11:00 a.m. - 4:00 p.m. I have several blank canvas' ready. I am not sure what I will be in the mood to paint, but roosters, cows, horses and aspen trees are all a possiblity. The show looks great.... artistsofTexas.orgArtistofTexas.blogspot.comDailyPaintersofTexas.blogspot
I will post my painting tomorrow. Thanks for viewing this blog.
Posted by Kay Wyne at 6:16 AM No comments: 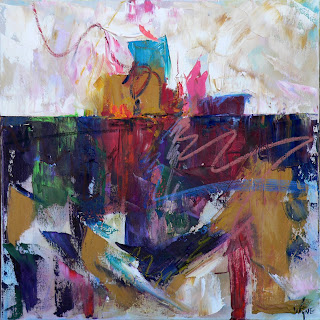 Horizon Series: Abstract #23
20" x 20" Oil on Gallery Wrap Canvas
This painting has deep rich colors, layers and layers of texture. It is on a gallery wrap canvas, so no frame is needed. Ready to hang. I made it to the studio yesterday, but did not get alot accomplished. One of those days. My head was hurting and I couldn't get very excited about my commission pieces. I worked on an abstract and took some pictures. I would like to finish up some paintings for the upcoming Cedars Open Studio Tour: http://www.cedarsopenstudios.com/. This all day event is so much fun. Over 69 artists are participating this year, so it should be a great time! Studio Art and Soul is always jam-packed with lots of visitors and freinds. Lots ofart, food, beer, wine!!! I hope that you mark your calendar for Saturday, November 20th. Thanks for viewing this blog!
Posted by Kay Wyne at 5:39 AM No comments: 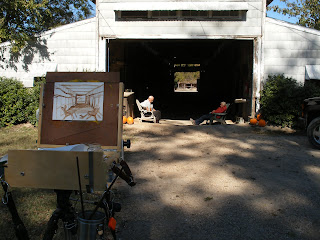 En Plein Air....painting outside on the spot. Yesterday was a perfect day for it in Dallas. It was a warm, sunny November morning. I met Lynn, Jerry and Carolyn (new painting friends) at the stables and went exploring. The horses were beautiful, the peacocks were out and the location was amazing....right in the city of Dallas. I was set up here with my easel painting the stable and these two men who were deep into conversation. Bob and Tex. I also ran into Dianne Mildren and met Buckshot, her handsome horse. Dianne quickly pointed out to me that riding Buckshot is her passion, just as painting is mine. I hope to pull some great paintings from this little outing. It was a wonderful Monday morning!!! Thanks for looking at this blog, I hope to finish the painting today that I started at the stables.
Posted by Kay Wyne at 7:00 AM No comments: 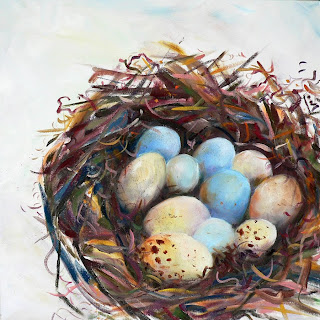 Here are a couple of my nest paintings...they are hanging at Dutch Art Gallery. Nests are one of my favorite things to paint. Nests are like people....they come in different sizes, shapes and colors, and are interesting. I have a small collection (two or more make a collection, right?) of nests that I have found. I need to expand my collection of two! I will be working on a commission piece today and probably painting plein air if it isn't too chilly here in Dallas. I hope that you enjoy viewing this blog. Happy Monday!
Posted by Kay Wyne at 5:53 AM 2 comments: 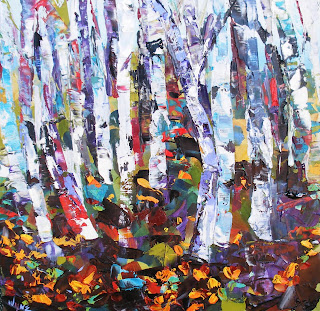 Aspens in Color
12" x 12" Oil on Masonite
This painting is hanging at the The Dutch Art Gallery. This small painting is only 12" x 12". I was talking to a lady who was interested in this painting....and she was drawn to it because of the colors. I told her that if the painting speaks to her, that is reason enough to consider purchasing. I have four other aspen paintings hanging at Dutch Art in the show. I was amazed at the wonderful art...really good art at the show. If you missed the reception yesterday, here is the show info:
Where Texas Finds Its Color
The Artists of Texas - Second Annual State Show
November 2 - December 31, 2010
The Dutch Art Gallery
10233 East Northwest Highway Suite 420
Dallas, Texas 75238
http://www.dutchartusa.com
I have been away from my easel and blog for about two weeks....I was in an automobile accident and I was sidelined for a while. But I am back! I hope to be posting some new paintings. Have an artful day! Thanks for looking at my blog...Kay
Posted by Kay Wyne at 6:48 AM No comments: